For the Love of Libraries: Leuven

Libraries are much more than bricks and mortar, as Caroline Mills discovers during a visit to Leuven in Belgium. The vandalism of war has twice struck Leuven, with its university library set ablaze by marauding German troops in 1914 and again in 1940. Caroline recalls the tale of how her great-grandfather took the initiative in helping restore the library after the first conflagration.

The aroma from my mug of latte spirals ever closer to the mammoth tangerine-orange lampshade dangling above. The mo dish and moody grey interior walls of the café on Leopold Vanderkelenstraat shut out the sound of the bustling streets of Leuven. It is registration week at the university and Leuven’s restaurants and bars are competing for the attention of this year’s new intake of students.

I’m reluctant to plunge a teaspoon into the milky froth of my coffee and destroy the barista-drawn heart so tenderly applied. It’s a work of art. But needs must. While others in the café tap away at laptops or chat about university matters, I reflect on a photograph of a man with a barbered moustache, white hair and bushy eyebrows. The photo is a portrait of Dr. Henry Guppy CBE, a stiff-upper-lipped Englishman who has a decisive frown. His starched white collar, protruding above his dark threepiece suit, seems to stifle any likelihood of a smile.

Henry looks stern. Yet, everything that I have read about this man suggests kindness, generosity, modesty, service and compassion. I have only ever known Henry in black and white. But his red blood runs through my veins. He is my great-grandfather.

I have come to Leuven to see Henry’s Belgian legacy — the city’s University Library, a striking building at the head of Monseigneur Ladeuzeplein. The library’s Renaissance demeanour — all Flemish frills and furbelows — would suggest that, like the university, the building has stood for centuries. But its architectural style belies the truth. Less than a century has passed since the foundation stone was laid in 1921.

I step outside into the late summer sunshine, dodging shoppers, sightseers and students and stroll the short distance to Ladeuzeplein. The streets are thronging as the tinkling carillon bells from the tower of the University Library sing a delicate tune (it is actually the Reuzegom, a Flemish drinking song), followed by a more sonorous clang which marks the full hour.

I glance at my watch for unnecessary confirmation and note the date — 25August. It stops me dead as the significance of the timing of my visit strikes me with a blow as forceful as the chiming bells now coming from the University Library. For it was on the 25th of August 1914 that German troops torched the Belgian city of Leuven. Within 24 hours, the 600-year-old library of the Katholieke Universiteit, now known as KU Leuven, was destroyed.

This is just an excerpt. The full text of this article is not yet available to members with online access to hidden europe. Of course you can also read the full article in the print edition of hidden europe 56. 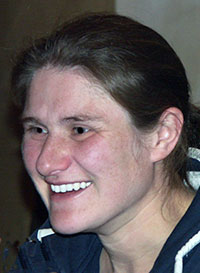 Caroline Mills is a freelance travel writer with a specialist knowledge of touring Europe. She loves to seek out less celebrated locations and the lesser-known features of popular places and writes on many subject areas as she traverses the continent. Camping, walking, the countryside, history and fine gardens feature regularly within her work, which includes articles for magazines, newspapers and websites plus travel guides. Taking pleasure in the simplest of things, a great day for Caroline is a hilltop walk with easy-on-the-eye views, allowing time to appreciate the scent of a wild rose or the colour and companionship of a native butterfly followed by a stroll around an abundant kitchen garden and an evening beside a crackling fire. At some point in time, there would be a frothy coffee and homemade cake!

Caroline is the author of Slow Travel: The Cotswolds, published by Bradt Travel Guides. As a lifelong resident of the Cotswolds, she loves introducing readers to the hidden pockets of this well-loved region. She is also the author (and photographer) of Cool Caravanning, offering a personal selection of the choicest English campsites with a view for campervans and caravans, and The Camping Pocket Bible, for enjoying life outdoors. Caroline has also contributed to travel guides on slow travel, walking and 1001 Escapes to Make Before You Die.

Caroline is a member of the British Guild of Travel Writers and Travelwriters UK. In 2018, she celebrated 30 years in publishing. You can find out more about her work at www.carolinemills.net or follow her on Twitter at @CarolineMills99.

Caroline Mills is a freelance travel writer with a specialist knowledge of touring Europe. She loves to seek out less celebrated locations and the lesser-known features of popular places and writes on many subject areas as she traverses the ...
Read More →
Related article

From Sylt to Samoa

We had set our sights on Samoa. But with a fierce storm closing in from the west, we decided instead to make for Zanzibar. Locally, it is the German spelling that prevails: Sansibar. The North Frisian island of Sylt may not seem the most obvious ...
Read More →
Related article

My brief was to take the pulse of eastern Germany on the 21st anniversary of her union (in October 1990) with her bigger neighbour to the west. Thus was a new and larger Germany born. Twenty-first birthdays have symbolic rather than any legal ...
Read More →
Log In