The city of Haarlem is just twenty minutes from Amsterdam. Guest contributor Richard Tulloch shows how Haarlem offers insights into a Holland beyond the big cities of the Netherlands.

Courtyards are among the most intriguing elements of the urban mosaic. It always pays to peek through gateways into the courtyards that lie beyond the cobbled lanes and elegant facades of a city. There are some European cities where the ancient central area is assembled around a whole series of courtyards: Salamanca (Spain), Oxford (England) and Haarlem (Netherlands) are examples. The earliest small courts in Haarlem (called hofjes in Dutch) were communities of single women (béguines) who constructed their lives, and their identities, within the limits of the courtyard. These were private and protected spaces, and the courtyards were predominantly functional: each had its own well, an orchard and a bleaching yard. The gate that linked the court to the street was tucked away and never ostentatious.

By the late eighteenth century, the heyday of the Haarlem hofjes, a new set of rules defined the life of these small courts. Most of the beguines had gone, and now the courts had lost their religious underpinning - though doubtless there was still a good dose of Calvinist piety in hofjes life. The elderly lived in the courts, and pious industry made way for the pleasures of a quiet retirement. Where once there was the communal pump, now there was a fountain. Parterres and paved walkways replaced the market garden and the orchard. Those who endowed the hofjes were anxious that their charity be known and acknowledged. A small gate served no good purpose, and the once inconspicuous little entrances to the hofjes were replaced by grand gateways - often designed to bear witness to the generosity of those who endowed the foundation. Courtyards ceased to be private space and became part of the public realm. Guest contributor, Richard Tulloch, has been exploring the hofjes of Haarlem.

Our houseguests in Amsterdam had queued for Rembrandt, van Gogh, Anne Frank and the Rondvaart canal boat trip. They had visited the red light district and checked out the coffee shops - both only in the interests of sociological research of course. "So what else should we see?" they asked.

"How about Haarlem," I suggested, "the original Haarlem, not the upstart New York version. It's only twenty minutes by train from Amsterdam. An hour by bike if you feel energetic. No gospel choirs, but there's the Teylers Museum. And Frans Hals, and some very fine hofjes."

Haarlem's main railway station is the oldest and surely one of the most beautiful in Holland. Its polished wood, stained glass and art nouveau tiling tell of an era when travelling by train meant luxury, rather than something you do out of necessity when your car is being serviced.

As we walked from the magnificent station to the centre of the town, the light was noticeably different from that in Amsterdam. 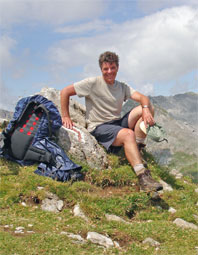 Richard Tulloch is an Australian author of books, plays and screenplays for young people, and is most notorious for writing the children's TV series Bananas in Pyjamas, screened in over seventy countries. His affection for children's literature and writing explicitly with young readers in mind brings invitations to travel the planet teaching creative writing workshops for kids. These have taken place in such offbeat destinations as Kununurra, Kampala, Yanbu, Balikpapan, Budapest, Oberursel, Ab Qaiq, Asmara, Ibadan and Tembagapura.

Richard splits his time between Europe and the Antipodes, spending part of each year based in Amsterdam (from where his wife hails). He regularly takes time out for adventures on two feet or two wheels. Find out more about Richard's work at www.randomhouse.com.au or contact him at richardtulloch [at] hotmail [dot] com.

Between East and West: The Ukrainian City of Lviv

The city of Lviv, located in the western reaches of Ukraine, is in many respects a classic central European city, a place which has more in common with Wien, Trieste and Budapest than with other cities in the former Soviet Union – of which Lviv was ...
Read More →
Related article

Few European cities can rival Leipzig when it comes to musical associations. Richard Wagner was born in Leipzig, Johann Sebastian Bach had an extraordinarily productive 27 years in the city, and the roll call of great musical names continues: Clara ...
Read More →
Related article

Dutch Friesland (or more properly Fryslan) is a world apart from the densely populated parts of Holland where cities rub shoulders with one another. Dutch planners ensure that a strip of open land divides Rotterdam from Den Haag, but one dyke and a ...
Read More →
Log In