The mystery of Los Picaos

Guest contributor Diego Vivanco visits the village of San Vicente de la Sonsierra in Spain's Rioja region to see how its inhabitants mark Holy Week. He witnesses a Lenten spectacle that is both theatrical and intimate at the same time.

San Vicente de la Sonsierra seems at first sight to be an inconsequential slip of a place. The village in the Rioja Alta wine region boasts little more than a thousand souls and, on this typically lazy Spanish Sunday afternoon, San Vicente beats to a relaxed rhythm. The village enjoys a dominant hilltop position, affording views to the distant Sierra de Cantabria and, closer to hand, over the surrounding vineyards to the Ebro, here a river of languid loops seemingly in no rush to get anywhere fast. Just like the inhabitants of San Vicente.

Nothing in the quiet village hints of what will soon unfold. For on this particular Sunday afternoon, San Vicente de la Sonsierra hosts a peculiarly lurid festival, an expression of faith, spirituality and culture that will have villagers lashing their own backs in a frenzy of self-flagellation.

I am fascinated by this extraordinary piece of religious theatre. And I am intrigued by the flagellants’ concern for hooded anonymity. All I know is that, for admittance to the Santa Vera Cruz fraternity, a villager must be an adult male in good standing with the Catholic Church.

“It will be best if you come for the September celebrations of the Holy Cross,” suggests Teodoro, a cofrade of the Vera Cruz brotherhood who had convinced me a few months ago to delay my visit and wait for a more appropriate time. It’s hard to understand what constitutes a ‘more appropriate time’ to watch a festival of self-flagellation. But Teodoro explains. “The September procession is much the same as that at Easter, but it’s an altogether quieter affair. It doesn’t pull the tourists and the media. All the elements of the picaos will still be there.”

So I abide by Teodoro’s injunction and make late-summer tracks for the Ebro Valley, there to witness on this September Sunday afternoon the most awful, and yet for many most inspiring, of all penances. It is called Los Picaos de San Vicente de la Sonsierra. The term Los Picaos needs a little unpacking. It’s a colloquialism that refers to one who is pricked or jabbed.

Across much of Europe, the religious rites of yesteryear are fading. But the Picaos does more than merely survive. It thrives and in its Easter rendition has become a staple in the tourist calendar. It feeds on a curious mix of tradition and devotion, aided and abetted by the morbid fascination of onlookers.

In the bar of the main square, old and young are playing cards. This is so standard a sabbatical routine that I do wonder if I have erred in the matter of either date or venue (or both). But up at Santa María la Mayor Church, there is evidence that the preliminaries are underway. Here members of the cofradía have gathered. In a small hermitage next to the church, a number of men are getting dressed in distinctive religious robes. A large wooden cross, a lightly embroidered white stole draped over it, rests against the wall of the building. 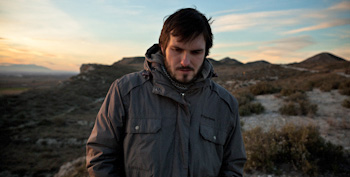 The Lavaux area in Switzerland is one of Europe's oldest winegrowing regions, a distinction which has earned for Lavaux a place on UNESCO's World Heritage List. The Lavaux vineyards drape the north shore of Lake Geneva at the western end of the ...
Read More →
Related article

Kenneth Mackay, the one-time postman in the village of Rhenigidale is long retired. But he is happy to chat to visitors about the life of social isolation and material deprivation which was once the norm in remote villages in the Outer Hebrides. We ...
Read More →
Related article

Next weekend, there's the chance to visit an extraordinary place in England - a village where the entire population was forcibly removed in 1943 in order to provide space on Salisbury Plain for American military manoeuvres. It's one of those places ...
Read More →
Log In