Europe's older port cities are among some of the continent's most unsung spots. hidden europe is not suggesting a weekend away in Europoort or Felixstowe, although doubtless even these modern container ports have their hidden charms. But there is an earlier generation of port cities which deserve more attention. How many ferry travellers across the Baltic alight at the Swedish port of Ystad and immediately head north, wholly unaware that behind the cranes and quayside paraphernalia lies one of the very best preserved mediaeval towns in all Scandinavia?

Old cities that still function as ports are some of hidden europe's favourite spots. Whether it be Cádiz on the Atlantic or Constanta on the Black Sea, there is in the old town areas of many ports, with their dark warehouses and foreign connections, a quite palpable sense of mystery that fires the imagination.

In this issue of hidden europe, itinerant Australian Amanda Kendle recounts her experiences in one of the Baltic's unsung port cities, Ventspils in Latvia.

There was a grey sky in Ventspils. Summer in the Baltic states, I had already learnt, is a fleeting thing, and not something that can be reliably linked to the calendar. That's why, as I stood in front of yet another unusual fountain on the riverfront, I was trying to find just the right setting on my digital camera that would compensate for Latvia's lack of light. A head and neck shaped bulge of a statue stood at the centre of the fountain, with dozens of spaghetti-like streams of water shooting out at various angles from its top. Behind me, I could hear two local men chatting. Out of the confusion of a stream of Latvian I distinctly heard a familiar piece of techno-babble, the phrase "digitala kamera", and I turned around in surprise. The younger man on the right looked sheepish, but his older companion seized the moment and said something that sounded very much like a question directed at me. "Ah, I'm sorry..." I began, not having grasped even the simplest Latvian phrase in my journey so far through this land of gentle meadows and soft Baltic shores.

The two men switched to English without missing a beat. "My friend doesn't understand what a digital camera is all about," the younger one explained. "Oh, they're fantastic," I enthused, and turned my camera around to show them the slightly dim photograph of the fountain I had just taken. The older man still looked confused, so I had a second idea. "Just a moment," I said, and moved back a step to snap a picture of the two of them. They eagerly peered at the screen, pointing to themselves and slipping back into Latvian in their excitement. Both grinned and turned back to me, and the older man translated their jabbering in a single succinct English word. "Splendid!", he said with a smile. 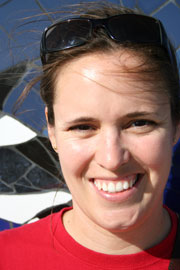 Amanda Kendle is an Australian travel writer with a special interest in Russia and eastern Europe. Prior to returning to her native Perth (Western Australia) in 2006, Amanda lived and worked in Europe for many years – with spells in both Slovakia and Germany. She has also lived in Japan. Amanda is one the lead contributors to the eastern Europe and Russian section of suite101.com. Her travel adventures have included a three-week journey across Siberia and an unusual Christmas in northern Finland. Find out more about Amanda at notaballerina.blogspot.com. She can be contacted at amandakendle76 [at] hotmail [dot] com.

Few airports have quite that cool retro feel of the original hexagonal terminal at Berlin’s Tegel airport. The airport opened in 1960 and was an iconic piece of design in "the new Berlin" - that part of the city, occupied by the Western Allies, ...
Read More →
Related article

The current plans to create free ports around the shores of the United Kingdom made us delve into the history of the porto franco. This year marks the 600th anniversary of the sale of Livorno - the Tuscan port which Genoa sold to Florence. It paved ...
Read More →
Related article

The city of St George: Genoa

The port city of Genoa commanded huge influence on account of its mercantile acumen and its early schemes for the management of public debt, which paved the way for modern banking. Today the city of St George still has the face of ...
Read More →
Log In