At the point in the southwest Balkans where Macedonia, Albania and Greece converge lies Lake Prespa. It is an extraordinary place - brackish waters, fill of bulbous weeds that pull at your feet. In the middle of the lake is Golem Grad, an island with stark white cliffs - and thousands of snakes.

Lake Prespa, a shallow lake shared by three countries in the southwestern corner of the Balkans, remains a mystery to many who visit the region. Lake Ohrid hogs the limelight, and it attracts many visitors. Few venture south to Lake Prespa and the Greek border region. However, with new tourism initiatives and growing cross border cooperation between Macedonia, Albania and Greece, Prespa's hour has come. Travellers who take the time to explore Lake Prespa will find a region of sublime natural beauty, a wealth of wildlife and a very rich and complex history - the remains of which are all around in traditional stone houses, Byzantine churches, castle ruins and more. Chris Deliso, who lives and works in Macedonia, has been to the shores of Lake Prespa.

Kiril Jonovski phoned a month or two back to say we had been in his dream. The octogenarian historian and lifelong Prespa resident had entertained us one evening last summer in his garden in Pretor, a Macedonian lakeshore village that claims, as the name suggests, a Roman lineage. Kiril's two books about the lake document its history, its flora and fauna, its people and their notable achievements and customs. Many of the pictures we saw were in black-and-white, while most of Kiril's stories were in full colour.

The tale we really liked involved a mongoose. In 1967, while presiding over a preservation society dedicated to the lake's bizarre island of Golem Grad (literally, ‘big city' in Macedonian), Kiril had decided to bring over two of these agile predators from the Croatian island of Mljet. There, in the Adriatic sunshine, the imported Indian mongoose had proved its mettle in policing and devouring Mljet's unusually rampant snake population.

Forty years ago, when Kiril's mongooses arrived at Lake Prespa, the Yugoslav portion of the lakeshore was a popular holiday spot. Each season brought school trips, and tens of thousands of Prespa regulars, mainly workers in the collectives. And lots of ordinary Macedonian holidaymakers too. Kiril's old photos, depicting water skiers, bathers and visiting Soviet biology students prowling the thickets in short skirts, all captured a past now totally lost. Along the road running above the beach, ragged pasted handbills advertised the concerts of yesteryear; forlorn amidst bramble lay the dilapidated communist- era bungalows and residence blocks where the party stalwarts, sentenced to a few weeks of leisure, enjoyed Prespa sunshine.

The snakes of Golem Grad were a nuisance, though most were not poisonous. For a time, the mongoose solution appeared to be working. However, "they didn't survive the cold of winter," lamented Kiril "and the snakes have had the run of the place ever since." 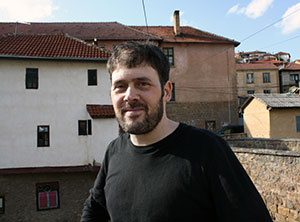 Watching the river flow: the Drin from source to sea

Laurence Mitchell looks at one of the most extraordinary rivers in the southern Balkans. Join us on the shores of Lake Ohrid in North Macedonia. The water that plunges over a weir at the northern end of Lake Ohrid eventually reaches the sea at Drin ...
Read More →
Related article

Life on the Lake: The Isola dei Pescatori

Late afternoon, the day trippers are leaving Isola dei Pescatori. Come sunset, the island in Lake Maggiore becomes a quieter, gentler place as the hum of motorised vessels on the lake is hushed for the day. Join us on a trip to the Borromean ...
Read More →
Log In